The Dead South (CAN) 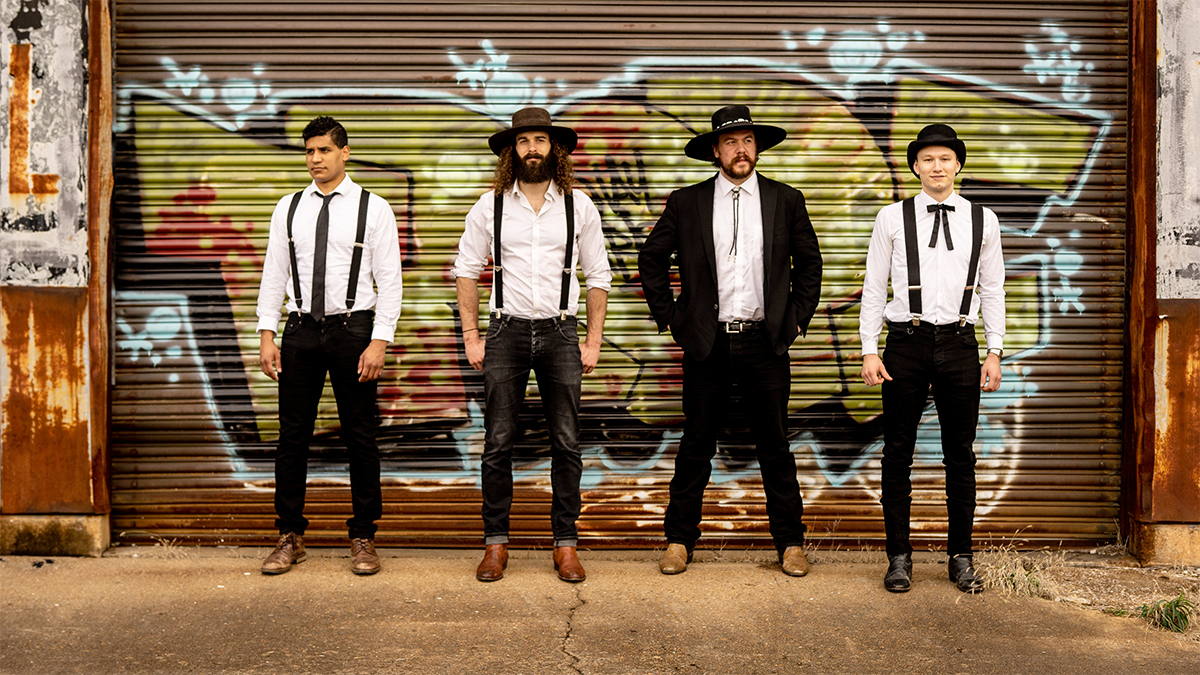 Saskatchewan is how it sounds: A province in the prairies of Canada. Double the size of Germany, but with less than one million residents. Lots of nature, and lots of silence. Perhaps lots of time to fill the silence with natural sounds, too.

This is where the quartet The Dead South comes from, and fits perfectly within this description. The debut album “Good Company” revealed the fourhatted, hairy and bearded fellas, with singer Nate Hilts as a focal point. The album is a perfect fit to the genres Folk, Neo-Folk and Bluegrass-Folk or even alternative Country with refreshing tunes to it. With impact, humor and a kind of bold manner of putting words into sound. The instrumentation stays knowingly pure: guitars, cello, banjo, kick drum, mandolin –building the acoustic fundamentals for full lead vocals and harmonies.

The first album really was a promise that is now fulfilled with the new release titled “Illusion & Doubt”. No doubt the four piecefrom the prairies has matured, not only because the banjo is now being played by a lady. Harmony changes as well as excellent and virtuosic instrumental parts have been added to their incredible energetic, passionate and sometimes surprisingly catchy melodies. But Hilts and company are far from being tame: “We are definitely closer to the Pogues than to Alison Krauss. Unfortunately, we do not possess much of the delicate elegance so we try and bring more energy and entertainment to our side. You could say we are a mix of Nu-folk with a few different styles mixed in between. We tend to add elements of classical, punk, rock, alternative, bluegrass, folk and everything in between.

”What is sometimes hard to describe, is often better to simply listened to. The opener‚ ‘Boots’, starts like a grizzly on ecstasy. After a short quiet prelude, the boots really start to want to dance. Lighted by banjo and guitar and grounded by a stoic cello, Hilts tells a more free-spirited love story: rough, sincere and honest.

With the following track ‘Every Man Needs a Chew’ –the first songthe band has ever written –they speed up with the impulsive tact, a squeaky fiddle and some Gypsy Swing components. There is proof of a second great lead singer from Scott Pringle in ‘Dead Man’s Isle’, –a drinking song with a great chorus and bizarre lyrics -a drunken guy expects his dog who is obviously sober to give him a ride home. If that doesn’t remind you of The Pogues, then maybe “One–Armed Man’, another tipsy party hymn, will.

They really feel good in an up-tempo environment, but they can do slower and subtle as well, as you can hear with ‘The Good Lord’: “This our version of a classic country tune. It is about a husband and wife separated by war. The wife waits pregnant at home wondering if the child will ever meet his father, while the father at war wonders the same thing,” says Hilts to this harmonically accommodating, but lyrically vexing song.That’s how they like it, and another good example is ‘Miss Mary’: “The album’s title is taken from a line in this song.

In classic Dead South fashion, a woman takes too many pills and murders her husband, before she comes to and realizes what she’s done” describes Hilts, as their type of humor.The same darkness can be found in the Western-Style of ‘Massacre Of El Kuroke’ and the gloriously nostalgic 8 minute “Spaghetti Western Ballad”, ‘Gunslinger’s Glory’.